with Mr. and Mrs. Achim

VEX Robotics is a program that offers students the opportunity to learn not only about robotics, but collaboration, teamwork, leadership, and most of all – the value of hard work. Led by the Achim family, whose sons are members of the Classes of 2020 and 2024, the Gaels 97140 A and B teams maintain a legacy of success.

Kennedy Gael’s Robotics Teams practice every weekend from September to the end of the season in late spring. These teams build well-engineered, creative robots and competed in seven VEX Robotics tournaments throughout Southern New York State. The 2021-2022 captains are Matthew Achim (Team A), Bart Casabona (Team B) and Gabriel Hidalgo (Team C). Our captains led their teams through a successful 2021-2022 season winning nine awards that recognized their robots’ design excellence, sportsmanship, programming and driving.

The team also maintains a blog documenting their work that also has links to the team Instagram accounts. Check it out here.

In April 2022, Team A, B, and C competed again at the Southern New York Champion title. Team A was recognized as a top team with a unique, ambitious design solution and creative thinking, Team A qualified to participate in the VEX World Championship 2022 in Dallas where they will compete with and against 800 of the best robotics teams from around the world in May 2022. Read more about the exciting State competition in Olivia Casabona’s Gael Winds coverage of the event: Robotics Qualifies for Worlds

December 4, 2021 – Team A and B won Tournament Finalists at Hudson Valley VRC Tipping Point Qualifier at Our Lady of Lourdes.

March 12, 2022 – Team A won the Create Award at the Southern New York High School State Championship, qualifying them for the Vex Worlds Championship in May.

May 7, 2022 – Team B wins the Energy Award at the Vex World Championship, recognizing them as a team that has shown extraordinary positive energy and enthusiasm as well as displaying a passion for robotics that enriches the event experience for others.

Following an impressive season and earning the Design Award at the NYS State Championship competition, Team A has qualified to compete at the World Championship VEX Robotics competition in Dallas May 4 - 9. 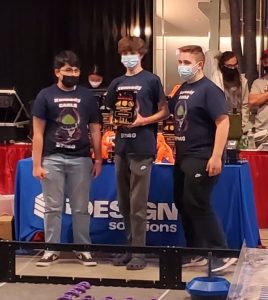 Kennedy VEX Robotics Team A is headed to the World...